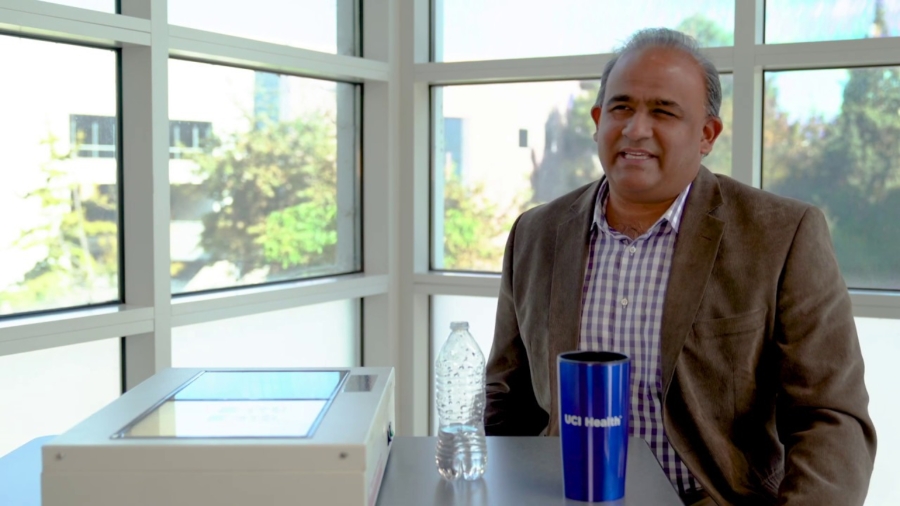 For UCI Health dermatologist Dr. Anand Ganesan, a specialist in skin disorders and a prolific research scientist, fighting cancer requires painstaking work to assemble bits of information — genetic information, in this case — to find a potential weapon against the disease.

That approach has led Ganesan and his colleagues to create a new molecular compound, ALY101, which has the potential to stop melanoma, the most aggressive type of skin cancer, in its tracks and possibly a range of other challenging cancers, too.

Ganesan, a UCI School of Medicine professor who holds both a medical degree and a doctoral degree in microbiology and molecular genetics, compares cancer and the ALY101 molecule to Jenga, a popular game in which players take turns removing parts of a tower made of wooden blocks.

“A cancer cell is a big Jenga puzzle,” he says. “We want to figure out which blocks — that is, genes — are the right ones to target. The first thing we did was to say, ‘Let’s take out each block, one by one, and see how to fix the puzzle.’”

Instead, he wanted to learn the role that each piece plays in cancer, in hopes of finding one he could pull out and stop the disease’s progression. “If we take away this gene, is the tumor still able to form?” he ponders. “Does it not metastasize? What happens?”

Eventually, Ganesan and his colleagues found a gene that plays a role both in chemotherapy resistance and in cancer progression. Their findings were published in the journal Cancer Research in 2012.

Then came the hardest part: figuring out how to switch off the finicky gene.

“That’s the real challenge because you have to target it when it’s switched on,” Ganesan says.

A key breakthrough came when he went to Italy to give a lecture on his discoveries and spoke with Marco De Vivo, director of the Molecular Modeling and Drug Discovery Laboratory at the Italian Institute of Technology. De Vivo uses sophisticated computer modeling to test which chemical compounds may be able to block a protein from binding to a particular spot on a cell.

Ganesan wanted to figure out which compounds would block the gene, but told De Vivo he was stymied because his target was unstable, flipping on and off. “He said, ‘Oh, that sounds interesting,’” Ganesan recalls.

Together, Ganesan and De Vivo used molecular modeling to create a new chemical compound that would do the trick. “That took a long time,” Ganesan says. “There was a lot of trial and error.”

In April 2022, Ganesan, De Vivo and colleagues published an article in the journal Cell Reports describing the promising results from ALY101. The work was supported by both the National Institutes of Health and the UCI AntiCancer Challenge, an annual fundraiser that provided his team with $40,000 in seed money.

There’s still much research to be done on ALY101 before it can be developed into a treatment, Ganesan says. In addition to further testing its effects on cancers, researchers have to determine the most effective way to administer it. He’s hopeful that it will help not only melanoma patients but also people with neurofibromas in the ear (tumors that can destroy hearing) and Ewing’s sarcoma (a bone cancer that strikes young people).

“‘We’re also looking at the drug for rare cancers,” he says. “There are a lot of rare cancers we have no treatments for.”

Born on a Basketball Court